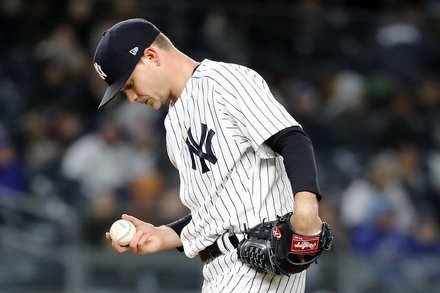 At some point in our lives, chances are we will encounter something that challenges the way we think of ourselves. Perhaps it’s your first office job breaking down your rebellious teenage world view. Perhaps it occurs trying show your kids ‘Dad’s still got it’. Whatever it is, it’s usually uncomfortable and is followed by some process of reflection and change.

That’s probably deeper than some think piece about a struggling Yankees starter needs to be so here’s a Zoolander GIF to break things up:

For Yankees starter, Sonny Gray, an identity crisis might look something like a 5.46 ERA, 10% walk rate and a 5 point drop in his ground ball rate – those are select numbers from Gray’s 2018 season to date.

You have probably worked out by now that this post is going to look a lot like most of the others on the site – a deep dive into a particular players struggles and a suggested course of action. In most of these posts I will describe this players condition as a slump, struggle or some other fairly bland term.

I haven’t done that here because I think this is different. The Yankees are trying to change who Sonny Gray is and so far that transition hasn’t gone smoothly. Sheryl Ring noted some time ago that Gray is the latest Yankees pitcher to boycott the fastball and sinker, favouring cutters and breaking balls instead.

Of course this is a fairly common adjustment in today’s game. The Astros just executed it with Gerrit Cole and he has been unhittable all season. But like Cole, Gray has always been a fastball dominant pitcher. Making an adjustment like this isn’t just simply a physical change, it’s a philosophical one too. And here lies the difference between these two pitchers.

Gerrit Cole has never been a ground ball oriented pitcher. His career high mark is around 49% just a few points above league average. Sonny Gray on the other hand has thrived by inducing weak contact on the ground, inducing a career high 56% in 2014 – that’s really high. Sonny Gray grew up in a world where groundballs were considered the optimal outcome, something a pitcher should be celebrated for. The former Vanderbilt star was excellent at this and he was celebrated for it as an All-Star at the game’s highest level.

But that doesn’t play in 2018, not like it used to and so the Yankees have tried to help him adapt to the modern game.

Sonny Gray has the pieces to make this work. His fastball averages over 93 mph and touches 96 – that’s good. He also features some GIFable breaking balls. Let me show you with the help of the Pitcher List and Pitching Ninja:

Is a Curveball. Is good. Enough said.

And now the Slider:

As you can see the Slider is also good .

There’s also a Change-Up (that I won’t show here) and he has the ability to both cut and sink his fastball. That is not the stuff you expect of a guy with an ERA on the wrong side of five. Throwing his Curveball and Slider more SHOULD have helped Gray but it’s hurt him instead and this is why I believe it’s important to look at this from a philosophical perspective as well.

So Sonny Gray, an All-Star talent in his prime years is struggling with an ERA over five, despite making an adjustment that SHOULD have made him even better than he had been previously. I’ve spent a fair while setting this up by now so I’ll cut to the chase and say that it appears that Gray hasn’t fully bought in to the approach the Yankees have designed for him. The former Vanderbilt star appears stuck between the worm-killing sinker baller he has been in the past and the new off-speed dominant pitcher the Yankees hope for him to become.

Gerrit Cole’s adjustments have been well documented in 2018. He’s throwing fewer fastballs and the ones he’s throwing are much higher in the zone – the latter evidenced in the chart above (L – 2017, R – 2018). This helps to disguise the two pitch types (fastball/breaking ball) making them harder for a hitter to distinguish – a phenomenon referred to as pitch tunnelling.

Pitch tunnelling is far from an exact science but we know that it can have meaningful consequences for a pitcher’s success. By making a pitcher’s fastball and breaking ball look the same at release (and for as long as possible), a pitcher is more likely to trick a hitter into a bad swing.

Let’s check in now on how Sonny Gray is doing:

As you can see, Gray has lifted his fastball some but it is still not in a position to tunnel effectively with his breaking balls. By failing to effectively tunnel his pitches, Gray has left his secondary pitches exposed while throwing his fastball mostly belt high. That’s never a good combination. Before we move on, let me show this to you visually: 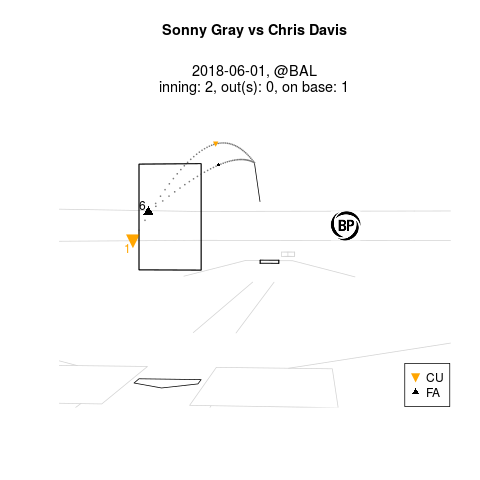 The plot above shows two pitches from an at-bat against Chris Davis just last month. Both pitches are located almost perfectly in line with Gray’s heat maps for the two pitches this year. As you can see however, at no point do these two pitches ever look like one another. Instead they are easily identifiable and that usually leads to undesirable outcomes.

I refer to this is a mid-career crisis for Gray as it represents a change in the ‘Who Am I?’ question for Gray. So far, the former All-Star has been unable to fully buy into the Yankees new plan for him, still working his fastball towards ground ball friendly locations.

The Yankees have tried to change who Sonny Gray is and so far, it hasn’t worked.