The Australian Baseball League kicked off with a bang over the weekend as the league is on pace to shatter last year’s home run totals.

The Australian Baseball League got off to a hot start this weekend with two factors playing starring roles in the show: Rain and Home Runs. The weekend was a wet one all down the East Coast of Australia but the league managed to fill an almost complete schedule of games, with the Sydney Blue Sox, Brisbane Bandits and Perth Heat each enjoying winning series.

However, beyond the excitement of live baseball returning to Australia one thing stood out above all else and it looked a lot like this:

Yep, Big Flies, Dongs, Dingers, Jacks. Call them what you will but they came in bunches and in all shapes and sizes and in every stadium that saw ABL action this week. In fact, the 6 teams combined to hit 30 Home Runs in 11 games this weekend – that’s a lot. In just one round, players managed to hit almost 20% of the total number of home runs hit in 10 rounds last season. Where 171 balls left the yard in the 2016/17 season, the 6 teams are on pace to hit 300 this year.

However, sometimes the macro numbers can be somewhat difficult to digest so I want to single out the offensive performances posted in two stadiums in particular. Melbourne Ballpark and Blacktown Sports Complex, home to the Melbourne Aces and Sydney Blue Sox and the two most notoriously pitcher friendly parks in the league. Let’s compare the 2017/18 round 1 performance to the 2016/17 season.

The first thing that stands out is that Sydney allowed just 8 home runs for the entire season last year (appx. 20 home games) – that’s amazing. The second thing that should jump out at you is that both of these stadiums allowed well over half (62.5% and 59.2% respectively) of their 2016/17 totals in just 4 games this year.

So What on Earth Happened?

Let’s first note the fact that this is A) an extremely small sample and B) a league which has a rather transient player pool year to year with much of the league being made up of minor league prospects. It is possible that this year’s crop of imports is simply more powerful than in previous years, though none of the three current home run leaders (Zac Law, TJ Bennett and Jake Fraley) hit more than 3 home runs in their 2017 minor league seasons so this explanation doesn’t hold much weight to me.

One could also look to the weather and whilst it was neither particularly cold or windy in any of these stadiums over the weekend, the air was still heavy from the wet conditions and there were 4 home runs hit into the wind in Melbourne in game 4 so I’m not sure this holds either.

Something has definitely changed though:

Sneak peek at the official ball for the 2017-18 @ABL season! pic.twitter.com/PUMBRtGJyI

That’s fine, it’s a baseball, it has an ABL stamp on it – so what? Well it’s all fine apart from the fact that Rawlings had been the Official Ball of the ABL up until this season: 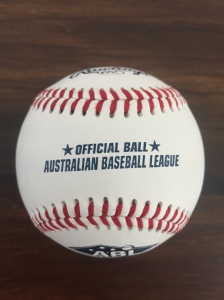 Again, that’s still fine. The league is free to name whichever supplier that they choose and in fact for a league this size it is important that it is constantly looking for the best deal it can get. This is certainly not a case of the league trying to manipulate the offensive environment. Further, from the side Brett Bros Sport, they have supplied the ABL with a high quality baseball to use for the 2017/18 season – that much is not in question.

Stay with us a while:


There’s just one thing, it appears that the Brett Bros baseball appears to travel further. Reports around the league over the weekend suggested that the seams on the Brett ball were perhaps flatter than the Rawlings and that the leather on the exterior of the Brett Bros ball felt harder. Both of these factors would be conducive to greater distances for batted balls on contact.

The ABL has a new official supplier of baseballs in 2017/18 and it’s a good one but with it may come a new, more exciting offensive era in the Australian Baseball League.